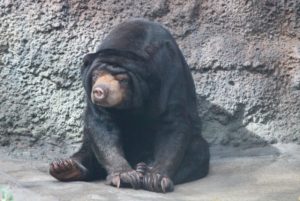 Veterinary staff at the Topeka Zoo and Conservation Center made the difficult decision to euthanize a thirty year old Malayan Sun Bear named Cup Cake Monday morning. “We knew this day would come,” said Zoo Director Brendan Wiley. “She was already beyond her normal life span when she arrived here two years ago but that doesn’t make it emotionally easier.”
Cup Cake and Ho Ho came to the Topeka Zoo in November of 2017 when their former zoo had to close their previous exhibit for construction reasons. “We talked about it for a long time,” said Wiley. “They were really old but it seemed like the right and fitting thing to do.”
Cup Cake and Ho Ho moved into the exhibit formerly occupied by Tiffany the gorilla. “The keepers in the area had become specialized in working with geriatric animals. We simply thought that if the two bears needed our home and our care to live out their remaining years, we were well equipped to care for them,” said Wiley.
Caring for geriatric animals isn’t unlike caring for geriatric people. “You need a comprehensive view of the animal’s health status,” said staff veterinarian Dr. Shirley Llizo. “In Cup Cake’s case, we dealt with advanced arthritis, severe dental issues and anemia.”
With an established medication regimen paired with a training program, Cup Cake thrived. “One of her favorite things to do was to watch her keepers and train with them,” said Animal Care Supervisor Shanna Simpson.
This past Saturday, Cup Cake was noticed to be limping. By Sunday, a neurological condition had rendered her hind legs useless. Throughout the weekend, additional medications were tried but did not produce noticeable results. Because of the positive relationship between the bear and her keepers, medications were able to be administered by injection and in Strawberry Newtons. Early Monday mornings as the condition progressed with head tremors, the decision was made to humanely euthanize her.

Ho Ho, Cup Cake’s mate (although the two never produced offspring), was allowed to be with her just
before she passed. The two bears were very tightly bonded. Ho Ho’s keepers will be keeping a close eye
on him and giving him a lot of extra love and attention.