Why are you doing this project?
The existing roadway is at the end of its life cycle. It has deteriorating pavement, inadequate drainage, and missing sidewalks. Reconstruction provides an opportunity not only to fix these things, but to transform the street to better serve the neighborhood and the community. It’s also an opportunity to relocate utility poles, enhance intersections, and add landscaping and street trees. The need for this project was identified more than five years ago and it was included in the projects identified for funding with the extension of the county-wide half-cent sales tax program approved by voters in November 2014.

What is “Complete Streets”? I’ve never heard of it and don’t think it should drive decisions on this project.
Complete Streets is a set of policies and design principles that strives to balance the needs of all users of the street. One of the guiding principles of the City’s Complete Streets Policy adopted by resolution in 2009, is to “promote a safe network of access for pedestrians, bicyclists, motorists, and transit riders of all ages and abilities.” The resolution also states that the City shall adequately fund the implementation of Complete Streets and incorporate pedestrian and bicycle facilities into capital improvement projects.

I’ve heard that there will only be one lane on 12th Street when it is reconstructed. I’m worried this will slow down my commute and make it difficult for me to get where I need to go.
The City is currently creating a design that includes one through-lane plus one shared lane for parking, bus loading, and deliveries, trash, etc. We are developing this design with reduced travel lanes for several reasons:

Won’t this double the time of my trip down 12th Street if there will be one less through travel lane?
No. There are many factors that affect travel time. The biggest delay when travelling the corridor occurs at the traffic signals and stop-controlled intersections. The design adds turn lanes to reduce delays at those intersections. Turn lanes will have adequate storage lengths to make sure through traffic can be separated from the major turning movement at the intersection.
The stop signs on 12th and MacVicar and 12th and Oakley will also be removed as they are no longer warranted under the MUTCD.

These counts show that 12th Street between Topeka and Gage carries between 3,000 and 6,000 vehicles per day, depending on location. This number has been decreasing over time and is expected to continue along that trend. For comparison, similar Topeka streets with one through lane of traffic and turn lanes where needed, include the following locations:

What will be the impact to on-street parking near the churches?
All on-street diagonal parking on the south side of the street will remain, and on-street parallel parking will remain. We will make sure parking needs for church services and functions are adequately addressed.

Why is an on-street bike lane considered? I never see anyone biking on 12th Street.
Topeka is a very bicycle-friendly city and 12th Street and Huntoon are important future bike corridors as indicated in the City’s adopted Bikeways Master Plan. There is great interest in using this corridor for bicycling. As part of Topeka’s Complete Streets policy, we wanted to explore various options for accommodating bicyclists on this corridor. To accommodate bicyclists and pedestrians, a shared used path on the north side of 12th will be constructed from S. Kansas to SW MacVicar. At MacVicar, a transition will be made from a shared use path to an on street bike lane. From SW MacVicar to SW Gage, because the right of way is narrower, an on-street bike lane and two six-foot sidewalks will be constructed.

What does one through lane mean?
A through lane is the continuous travel lane for motor vehicles. The proposed design for 12th Street will have one through lane, but it’s important to note that the street will also have turn lanes as needed at the signalized and stop controlled intersections. In addition, there will be a shared use lane for parking, deliveries, buses, emergency vehicles, etc. that runs the full length of the project.

Our parking, like most on our block and in the neighborhood is in the back of our alley. Almost every resident has a detached garage with alley only access. Does the city have plans for the residents that live in between 12th and Huntoon to have greater access to their alleyways?
As part of the 12th Street project, all alley approaches will be reconstructed to City of Topeka minimum standards. Getting in and out of alleys will be made easier.

What is the design layout for sidewalks?
The width of the existing right-of-way is very much a consideration.
The sidewalk and shared use path widths are as follows:

There is a lot of attention being given to cyclists and pedestrians. Has anyone counted bicycles and pedestrians?
Cyclists and pedestrians have been counted in Topeka annually since 2013. Counts are taken each year on the same days and in the same locations in order to evaluate localized trends. Volunteer counters use a Standardized National Bicycle and Pedestrian Documentation (NBPD) method developed by the Institute of Traffic Engineers (ITE). In 2018 the annualized total count of cyclists and pedestrians at 13th and Randolph, which is the closest counting location, was 13,206. Additional data and mapping is available at topekampo.org/.

Current Traffic Data
In May 2019, the daily and peak hourly traffic was intentionally counted while school was in session. Historic and current daily traffic count data is shown below. 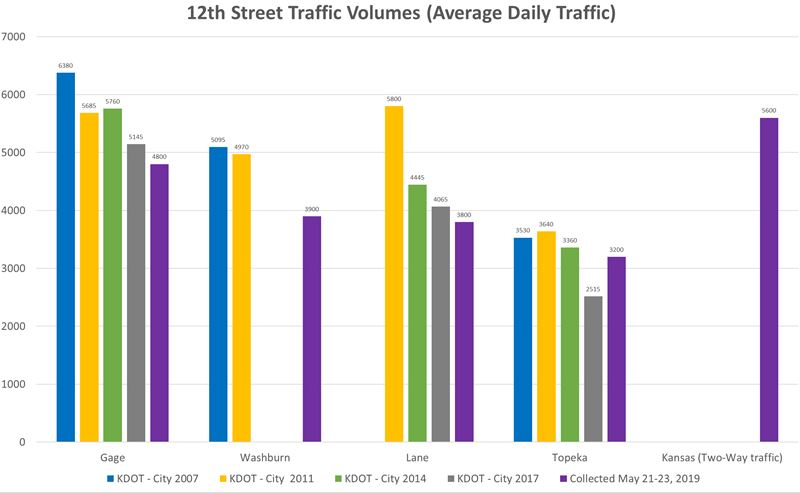 Additionally, the planning/design team met with representatives from USD 501 to hear their specific concerns and understand their, car, bus and pedestrian patterns. In addition, there is a city-wide “Safe Routes to School” plan that ahs ben used during development of the design. Following are some relevant links to the City of Topeka Plans and Studies:

Traffic Count Projections
The following two maps are based on a regional transportation models for what the traffic counts are projected to be in 2040. The focus is 12th Street and Huntoon Street from S Kansas to SW Gage.

The first map shows projected traffic counts for two through lanes, which is the same as today. The second map projects the traffic counts for one through lane, which is what the plans are right now for 12th Street. The one-lane model may show slightly lower traffic volumes on 12th Street. Some of those trips are diverted to other east/west streets.

Besides the traffic counts, the level of service is designated by colors. The colors range from highest service level to lowest service level are green, then yellow, then orange, then red. The level of service means there may be a bit longer delays. However, while red is the lowest level of service, it is still in an acceptable range in terms of a volume (number of vehicles) to capacity ratio (the number of vehicles the street can carry). In other words, the delays may be longer but still in an acceptable range. 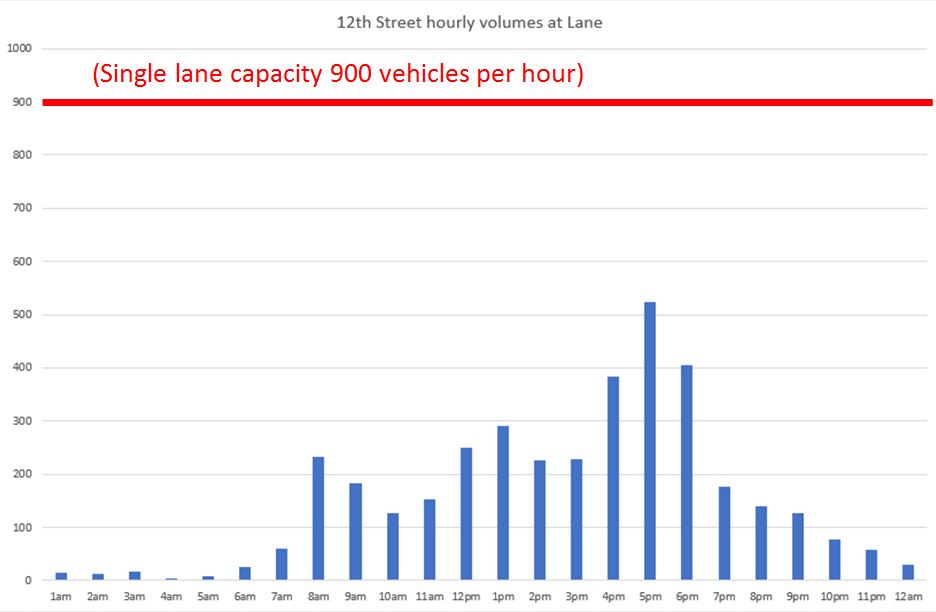 What effect will the improvements have on the bus routes?
Representatives from the Metro have been involved in this project from the beginning. There are 17 existing bus stops on 12th Street. There will no impact to the route when construction is completed. Significant improvements are planned at many of these stops including one new shelter, a handful of benches and concrete pads throughout. Our team is working with Metro to incorporate their design guidelines where possible.

In conjunction with the other planned improvements on 12th Street, public bus service:

The gas lines were just put in, are you going to spend more money relocating them?
Private utilities including gas, electric, cable, and others are permitted to be located in the public right-of-way with the understanding that if public improvements are needed, the utilities have to relocate at their own expense with no cost to the City. It is true that many of the gas lines along 12th Street have recently been upgraded and in some cases relocated. The design team is working with the gas company to minimize the need for further relocation work.

The coordination, planning and relocation of utilities is a significant effort that can have a tremendous impact of both the cost and scheduling of the road improvements. The city is working with each utility one-one to find solutions that work for everyone.

There are sanitary sewer, water and storm sewer improvements that will be made in conjunction with the project. Much of this work is necessary to replace the existing aged and deteriorated pipes currently in place. The planning, coordination and design of these public utilities is part of the overall utility coordination effort.

Will parking be allowed 24/7 in the parking lane (unlike today)?
Exactly what, if any, restrictions will be placed on parking will consider turning lanes, bus stops, alley access, trash trucks, and emergency vehicles. Our intent is to provide convenient on-street parking wherever and whenever possible.

Will 12th still be a snow emergency route?
Currently, 12th Street is a designated Emergency Snow Route and there are no plans to change that status.

Connect with your local government